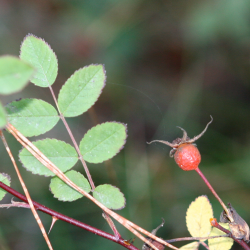 Rosa gymnocarpa, with sepals deciduous in fruit, generally reaches 5–20 dm. It has stems with prickles few to many; leaflets generally (5)7–9, glabrous, with glandular teeth; pedicel generally stalked-glandular; the glabrous and glandless hypanthium is 1.5–2 mm wide at flower; and pistils number 5–10. It generally grows in shade to semi-shade in forest or scrub.

Rosa spithamea, with sepals persistent in fruit, is generally < 5 dm tall and has prickles few to many and prominent, stalked glands on the hypanthium at flower. It grows in open forest and chaparral, and is often a fire-follower. The “nearest known populations of R. spithamea” are “well removed from known populations of R. pinetorum, however, hybrids of R. gymnocarpa and R. spithamea can key to R. pinetorum (Lewis et al. 2014; Ertter 2015).

Rosa californica, which grows with R. pinetorum on the Monterey Peninsula, is thicket-forming, reaches 8–25 dm, and has compressed, generally curved prickles with thick bases. It generally favors moist areas, and is often found along streams (Ertter 2015).

Due to their “extensive phenotypic plasticity, rampant hybridization, and polyloidy” (Ertter and Lewis 2008), members of the genus Rosa are notoriously difficult to classify and, as a result, have a “complex nomenclatural history” (Ertter 2001; Bruneau et al. 2007). Ertter (2001) notes that, in California alone, about “60 species names have been proposed and applied.” Recent DNA analysis (Bruneau et al. 2007) has only confirmed this difficulty, revealing only a “paucity of differentiation between rose species at the molecular level.” Indeed, it has been said that applying the “classic biological species concept to Rosa” may yield only a few species worldwide! (B. Ertter, pers. comm.).

Historically, the epithet Rosa pinetorum has been applied to “dwarf roses throughout the Coast Ranges and Sierra Nevada of California that “lacked the conspicuous stipitate hypanthial glands that characterize R. spithamea” (Lewis et al. 2014). In the Coast Ranges, however, stipitate glands may or may not be present in R. spithamea, probably as a result of hybridization—a fact mentioned in the 2014 Flora of North America treatment (Lewis et al.). Current treatments (Lewis et al. 2014; Ertter 2016) only “tentatively” retain R. pinetorum “as a distinct species” and restrict its range to the Central Coast in general and the Monterey Peninsula in particular—citing the presence of other highly “localized endemic species” in this area and the significant distance from known populations of R. spithamea. The authors also note that plants “assigned to this reduced circumscription clustered with R. gymnocarpa in a molecular phylogenetic analysis” (see Bruneau et al. 2007). More detailed research is needed to determine whether this clustering indicates a “close relationship” between these two taxa or whether it is due to introgression (Lewis et al. 2014).

As Barbara Ertter notes on her website on native California roses, “the handful of populations currently identified as Rosa pinetorum exhibit greater morphological variation than would be logically expected in a single localized species” (2001). One scenario that might explain this variability invokes the ideas of ecologist Edgar Anderson (1948, 1949), who investigated the long-observed connection between habitat disturbance and hybridization. Perhaps the ancestral R. pinetorum genome was restricted to the Monterey Peninsula, along with Monterey cypress (Hesperocyparis macrocarpa) and Gowen cypress (Hesperocyparis goveniana)—both of which are now on the verge of extinction there. Habitat alteration (or “habitat hybridization”) from human activities may then have brought R. pinetorum in greater contact with other native rose species with which hybridization may have occurred—and which may have resulted in “genetic swamping” of the R. pinetorum genome. More genetic studies are necessary to tease out these relationships (D. W. Taylor, pers. comm.).

The type locality of Rosa pinetorum at Point Pinos in Pacific Grove on the Monterey Peninsula was based on collections made from 1903–1931. It has been extirpated for many decades due to development in this area.

Occurrences at Veterans Memorial Park, the S. F. B. Morse Preserve, and Pebble Beach on the Peninsula are presumed extant, and conservation and proper management of these “core” populations are crucial for the retention of the R. pinetorum genome.

The current status of plants at Point Lobos State Natural Reserve is unknown. An occurrence along Gibson Creek east of Point Lobos is based on a 1936 specimen and is in an area that has been developed. An occurrence on Lobos Ridge was observed in 2003 and is threatened by development.

Plants that key to this species have been observed in Carmel Valley at the Santa Lucia Preserve and at Garland Ranch Regional Park, though these have not been officially documented.

The one Santa Cruz County occurrence at the mouth of Waddell Creek in Big Basin Redwoods State Park in the Monterey pine forest was last documented in 1932. A Felton specimen/occurrence has since been determined to be R. gymnocarpa.

Other populations outside the expected habitat of Monterey pine forest are based on specimens that key to R. pinetorum. Some of these may be hybrids between R. gymnocarpa and R. spithamea. Until further genetic/field work is conducted, however, these populations should be managed as R. pinetorum.