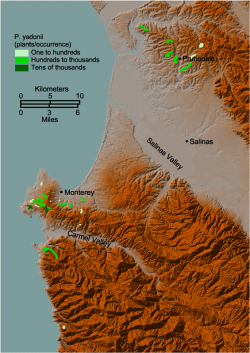 Associated soils are sandstone outcrops or shallow soils above granitic bedrock. On ancient marine terraces above decomposed granitic bedrock in forested communities, in highly leached and acidic soils, typically with a clay hardpan at variable depths.

Distinguished from the other Piperia species by having three green and white upper tepals and three pure white lower tepals. Flowers that appear very late in the season may lack any green color. Another important distinguishing characteristic is the characteristically short spur.The leaves of all but the largest plants wither by flowering time.

The range of P. yadonii overlaps with P. elegans, P. elongata, P. michaelii, and P. transversa and can only be reliably distinguished from them in flower. Published records of occurrence in mixed populations with P. elongata or P. elegans are known.

The primary threat to this species is habitat loss, although other significant threats include floral herbivory (deer, rabbits, possibly other small mammals and invertebrates), competition from nonnative plants, as well as habitat loss due to fire suppression. Habitat fragmentation may present a threat as the species requires pollination for optimal seed set and shows signs of inbreeding depression.

P. yadonii poses a number of difficulties to any monitoring effort. First, it is difficult to identify except during a brief flowering period. All populations need to be surveyed during flowering to determine whether other species of Piperia occur intermixed. Second, an unknown proportion of each population remains underground as dormant tubers in any given growing season, monitoring over a several-year period is suggested. Of the individuals that do emerge and leaf out in any given year, only a small percentage flower and there is strong variation in flowering rate between years, populations, and perhaps even habitats. Hence abundance is best tracked by counting individuals in leaf, since the leaves have senesced by the time flowering occurs. Dormancy and the difficulty in identifying the species except during flowering make it extremely difficult to track population dynamics or estimate population size (Wells and Willems 1991; Rasmussen 1995).