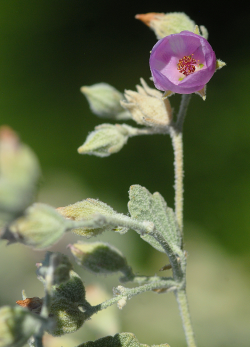 Endemic to California in the upper Salinas River watershed in Monterey County.

Only known from 12 occurrences (CNPS 2010), the distribution and abundance of this species requires field work—isolated colonies may occur along the length of the Salinas River. Prior to 1990, this species was known only from the type collection dating from 1889 from the "Salinas River" and was presumed extinct. Many of the southerly colonies near Hesperia School, which essentially constitute one population, occur in an underdeveloped rural residential subdivision and are vulnerable. Populations near Sargent Creek, San Ardo are vulnerable to oil extraction and exploration. Other threats include grazing and road construction (CNPS 2010).