A. pajaroensis growing over A. hookeri ssp. hookeri on a shallow-soiled ridge in maritime chaparral. 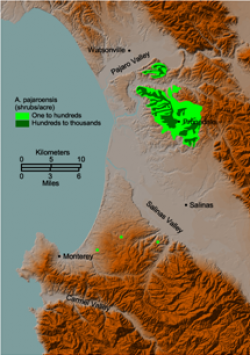 Arnold series soils (derived from the Aromas Sands Formation) in maritime chaparral or around the edges of or under sparse canopy of coast live-oak (Quercus agrifolia var. agrifolia) woodland. In the Prunedale hills, after a long period without fire and consequent overtopping by oaks, it occurs for the most part on ridges where soil depth and development are comparably shallow; 30-760 m.

December to February (identification possible throughout the year).

The Larkin Valley location in Santa Cruz County documented by a single 1935 specimen is now a residential development and was not relocated by Griffin (1978); much suitable habitat in that region was "conserved" in the 1930s by plantations of exotic Eucalyptus globulus and southern California natives Torrey Pine (Pinus torreyana) and lemonade berry (Rhus integrifolia), eliminating maritime chaparral ecosystems. The two CNPS (2010) reports from Davenport quad in Santa Cruz County are almost certainly misidentifications of A. andersonii.

This species requires fire to regenerate from viable seed buried in the soil. The exact triggers for germination are unknown, but may (as with other manzanitas) include a combination of both heat and chemicals from charred wood or smoke. The fire frequency necessary for stable populations is also unknown but is probably on the order of 80–100 years. Fragmentation of the habitat by housing may make utilization of controlled fire impossible.

Stands in the Prunedale region have declined owing to residential development and fire suppression (Davis 1972, Griffin 1978). One stand near Prunedale visited by Roof (1980) in 1964 and 1966 is confirmed extirpated by residential subdivision. The status and abundance on the Elkhorn Slough Foundation conservation lands requires field determination. The species is extensively used in cultivation, especially the cultivar 'Sunset' (a hybrid between A. pajaroensis and A. hookeri ssp. hookeri), which was originally collected at Manzanita Park and 'Paradise,' collected along Paradise Road.

While researching the distribution of A. gabilanensis in the early 2000s, a small, hitherto unknown population of A. pajaroensis was located by Parker and Vasey (2004) in the Gabilan Range, on a ridge adjacent to the Salinas Valley. This occurrence is approximately 12 miles from the nearest perviously known population and added San Benito County to the species' range (Parker and Vasey 2004).