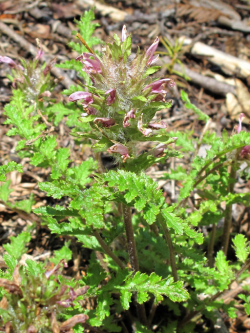 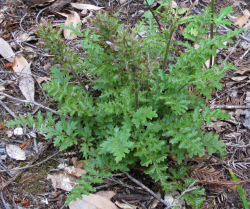 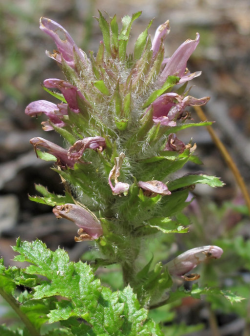 This fact sheet was prepared by Chris Hauser, Dylan M. Neubauer, and Daniel R. Brumbaugh (editor) under award NA04N0S4200074 from the National Oceanic and Atmospheric Administration (NOAA), U.S. Department of Commerce (DOC). The statements, findings, conclusions, and recommendations are those of the authors and do not necessarily reflect the views of the NOAA or the DOC.

Robust Dudley’s lousewort populations are found only in areas with both a low density of understory plants and a very thin layer of leaf litter, due to infrequent natural or human disturbances (wildfires, river floods, light foot traffic, and/or leaf or vegetation removal), or on steep slopes that tend to naturally shed leaf litter (road embankments or riverbanks) and prevent establishment of other, competing plants. Within the Portola Redwoods State Park, the species is mostly found in areas associated with human activity, such as road embankments, trail edges, and camping areas, with few plants found growing in more natural settings. Along the North Fork of the Little Sur River, most plants are found growing in natural settings, such as in rocky alluvium of river terraces and riverbanks, often at the high-water level of annual river flooding, with very few plants found growing in areas associated with human activity (Hauser 2018).

Dudley’s lousewort is very similar to two other Pedicularis species native to the Central Coast region. The common warrior’s plume (P. densiflora) has a deep red to red-purple corolla with a much shorter lower lip in relation to the galea (Vorobik 2013). Warrior’s plume is strongly rhizomatous, is pollinated by hummingbirds, and is associated with oak woodland and chaparral. The Arroyo de la Cruz lousewort (P. rigginsiae), a recently-described species from northern San Luis Obispo County, has “narrower leaves with more numerous lateral lobes, [a] straight rather than distally bent galea, and [a] shorter lower corolla lip.” This local endemic occurs in the interface between coastal prairie and dwarf maritime chaparral (Keil 2019), rather than coast redwood forest or coastal riparian forest.

Observations suggest that Dudley’s lousewort is adapted to occasional disturbance, such as fire, flooding, and brush removal, which removes leaf litter and reduces cover of competing herbs and shrubs (Kuska 2011, Hauser 2018). Robust populations are only found in locations that are affected by occasional moderate natural and anthropogenic disturbances, such as along road and trail embankments, in camping and other use areas that experience light foot traffic, along utility corridors where shrubs have been removed, or along the banks of the Little Sur River where occasional floods scour the riverbanks. Populations of Dudley’s lousewort tend to decline where they become shaded under a dense tree or shrub canopy, and when the forest floor becomes carpeted with a dense, deep layer of leaf litter (Hauser 2018).

Dudley’s lousewort is said to grow from a “branched caudex,” in which a single plant can form multiple growing points—or root crowns—at the soil surface, each bearing a rosette (Elmer 1906). Because numerous seedlings often germinate at a single site, it can be difficult to distinguish a cluster of individual plants (genets) from the potentially numerous rosettes (ramets) of an individual plant. To do this accurately would require digging up plants, so recent census protocols have focused on counting the total number of rosettes (ramets), rather than attempting to determine the number of individual plants (genets) (Hauser 2018, Diller 2019). Therefore, the actual global population size for this species is known to be significantly lower than the number reported in the yearly rosette censuses (Hauser 2019).

Due to the dearth of scientific information on Dudley’s lousewort, there has been much conjecture about its biology and ecology. For example, there are claims regarding the essential requirement of Douglas-fir as a root host-plant. Currently, though, the hemiparasitic nature of this species is not well understood. What is known is that some species of Pedicularis are dependent on root host-plants for only a portion of their lives, some are exclusively saprotrophic, and some are exclusively autotrophic (Sprague 1962a). The root host-plants for Dudley’s lousewort—if any—are still unknown. Sprague (1962a) lists tan oak, California huckleberry (Vaccinium ovatum), and blue-blossom (Ceanothus thyrsiflorus) as potential root host-plants, while making no mention of Douglas-fir. Also, many patches of Dudley’s lousewort are found in places with no Douglas-fir nearby, and some robust individuals occur in areas with no other apparently associated plants (Hauser 2019).

Other claims have been made about the dispersal of seed by ants, birds, deer, slugs, and other animals, including the suggestion of elaiosomes on the seeds. However, Elmer (1906) provides a detailed description of the seeds of Dudley’s lousewort and makes no mention of elaiosomes. Recent photomicrographs of the seeds similarly show no elaiosomes. It is worth noting that the presence of elaiosomes on seeds is generally obvious, as they often have distinctive coloration and are frequently as large as the seeds themselves. Therefore, until detailed scientific studies can be conducted, any conjectural statements should not be relied upon to form management objectives for this species.

In the early 1980s, Pedicularis plants were discovered by Rhonda Riggins in a single population in the Arroyo de la Cruz region of northwestern San Luis Obispo County. Although they were initially treated as P. dudleyi, Riggins and other botanists immediately recognized that these plants were likely to be taxonomically distinct due to differences in their morphology and their ecology. In January 2019, the Pedicularis plants in in this population were described as a new species, P. rigginsiae D. J. Keil, the Arroyo de la Cruz lousewort (Keil 2019).

Currently, Dudley’s lousewort is known from only two extant occurrences. One location, the type locality, first documented in 1903, is within and adjacent to Portola Redwoods State Park in San Mateo County. The second location, first documented in 1966, is within the Los Padres National Forest and Camp Pico Blanco, a private inholding owned by the Boy Scouts of America within the National Forest, in Monterey County.

The San Mateo County occurrence consists of approximately 32 small patches. Following census counts of most of these patches, surveyors reported 858 rosettes in 2011 (Kuska 2011) and 870 rosettes in 2018 (Diller 2019). It has been postulated that this population has become restricted to human-created habitats, due to the cessation of landscape-level disturbances, especially wildland fires, which has led to a large cover of California huckleberry and other understory shrubs (Kuska 2011). While no historical census records exist to support this claim, this inference about sensitivity to declining natural disturbances seems logical given current conditions, where plants in this population are largely restricted to places with man-made reductions in leaf litter and the shrub layer in the forest understory, such as trail edges, steep roadbanks, and places with light foot traffic.

The Monterey County occurrence consists of approximately 35 small patches growing along the North Fork of the Little Sur River. Approximately one-third of the patches occur within Camp Pico Blanco, including one very large patch near the camp kitchen building. These plants have been monitored and defended by CNPS volunteers since at least 1982 (Branson et al. 1982). Following census counts of most of these patches, surveyors reported 1220 rosettes in 1982, 1378 rosettes in 2011 (Kuska 2011), and over 960 rosettes in 2018 (Hauser 2019). Since 2013, with the merger of the Boy Scout’s Santa Clara County and Monterey Bay Area Councils into the Silicon Valley Monterey Bay Council, and the subsequent creation of a new Conservation Plan (EMC Planning 2013), the Boy Scouts have become supportive collaborators in the care and maintenance of these plants growing on their property (Benoit, Hauser, pers. comms.).

The two historical occurrences in Santa Cruz County (Aptos and San Lorenzo River) were documented in the late 1800s, but have not been relocated despite extensive searches, and are presumed to be extirpated as the result of habitat destruction. Other reports of Dudley’s lousewort are the results of misidentifications of warrior’s plume (P. densiflora), including reports from Edgewood Park in San Mateo County and along the Big Sur River in Monterey County.