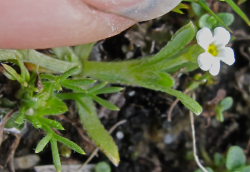 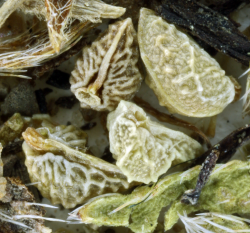 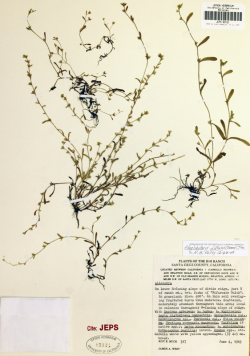 A red polygon indicates an extant occurrence; yellow indicates the occurrence has been extirpated.

Twelve occurrences are known for this species. The type locality at the Presidio in San Francisco is presumed extirpated. Populations in Santa Cruz County have been impacted by loss of habitat by development and non-native species such as Trifolium subterraneum and Hypochaeris radicata. As of 2015, plants had not been observed for the previous two years at the Graham Hill Rd. site, where the plant is associated with the listed Santa Cruz tarplant (Holocarpha macradenia) and Gairdner's yampah (Perideridia gairdneri ssp. g.) (Haley, pers. comm.). Colonies at Wilder Ranch State Park also appear to have diminished over recent years (Hyland, pers. comm.). A small colony at Marshall Field on the upper UCSC campus was still extant as of 2015, though plants did not number more than 50. This area is being heavily impacted by mountain bikes. As of 2015, two of the several remaining mini-colonies in the Scott Creek watershed have not appeared over the past two seasons probably due to low rainfall amounts. These two colonies have never numbered more than 20-30 plants in a good season. The other colony is still extant and has not been adversely impacted by either grazing or competition from native and non-native grasses (West, pers. comm.).