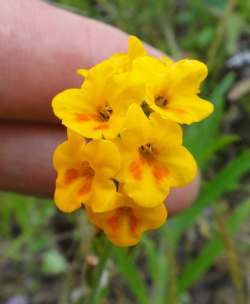 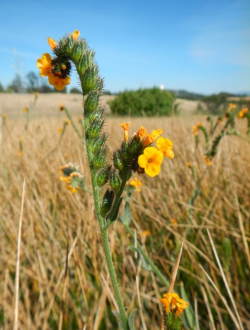 A red polygon indicates an extant occurrence; yellow indicates the occurrence has been extirpated

This fact sheet was prepared by Dylan M. Neubauer and Dean W. Taylor under award NA04N0S4200074 from the National Oceanic and Atmospheric Administration (NOAA), U.S. Department of Commerce (DOC). The statements, findings, conclusions, and recommendations are those of the authors and do not necessarily reflect the views of the NOAA or the DOC.

Small isolated populations in our region are confined to the Scott Creek watershed on private land and on Cal Poly's Swanton Pacific Ranch. One small inland population has not been seen in a number of years (West 2015). Another coastal population of ca. 50 plants was observed in 2016 in an area that is grazed by cows. Suitable habitat on BLM's Coast Dairies property requires surveys.

A CNPS Rare Plant Treasure Hunt survey was conducted in 2013 in Contra Costa County at an existing occurrence. Surveyors documented two colonies that appeared to be doing well despite the presence of non-native weeds.

Wide distribution in San Francisco Bay region and North Coast Ranges suggests this species is easily overlooked. Perhaps because of the unusual flower morphs within this species (Ornduff 1976), its geographic range is poorly documented. Reports from Yosemite Valley and Siskiyou County are doubtless attributable to the weedy A. intermedia.

Collections and reports from the San Joaquin Valley and Sierra Nevada Foothills are most likely heterstylous populations of A. eastwoodiae (Kelley and Ganders 2013).

This species has the lowest chromosome number (n=4) in the Boraginaceae, and amongst the lowest known for higher plants. A moth endemic to Central California, Ethmia albitogata, is known to use A. lunaris (probably along with other Amsinckia spp.) as its larval food plant (Powell 1973).