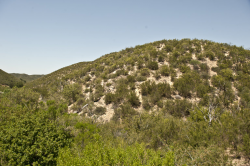 In 1934, George J. Goodman described Chorizanthe rectispina (Latin rectus, straight, and spina, spine) from a type specimen collected by Edward Palmer (1) from “McGinness, 25 miles northeast of San Luis Obispo” on July 10, 1876 (2). Goodman placed the taxon in his new subsection Uniaristatae, with a center of distribution in San Luis Obispo County. Other members of this subsection were C. biloba, C. clevelandii, C. obovata, C. palmeri, andC. uniaristata—all having inner perianth lobes erose, and the “long tooth of the involucre ... conspicuously elongated.”

Within Goodman’s circumscription of C. rectispina, he included “Chorizanthe uniaristata of auths., in part,” explaining that “[t]he long, straight tooth of the involucre caused this species to be confused” with that taxon—“the error having been initiated by Dr. [Sereno] Watson.” Based on morphology, Goodman believed C. rectispinawas most closely related to C. obovata, and he described the range of the former as occurring from San Luis Obispo to Santa Barbara counties. (The Santa Barbara specimens cited by Goodman have since been annotated as C. obovata.)

In their 1989 “Revision of the Annual Species of Chorizanthe,” James L. Reveal (3) and Clare B. Hardham (4) retained section Uniaristatae (5),but placed C. rectispinainto their new subsection Petasata (6) (meaning “with a hat on, alluding to the dense, colorful flat-topped inflorescences”) of section Herbaceae Benth.—along with C. biloba [SCoR, 1B.2]; C. blakleyi [s SCoRO, 1B.3] (7); C. obovata [s SCoRO]; and C. ventricosa [SCoRI, 4.3, serpentine endemic]. The authors mention that Philip A. Munz (1958, 1959) had “either reduced in rank or submerged into synonymy most of the species in this subsection,” but later changed his opinion (1968).

Reveal and Hardham (1989) note that “the few specimens of C. rectispina that were known prior to 1934 were generally referred to C. uniaristata,” though “the two are well differentiated and not all that closely related.” They describe C. rectispina as a “spreading to decumbent plant with an open aspect,” and, “[u]nlike the remaining members of the subsection Petasata, ... never numerous so that the plants are never obvious from a distance. Individually, however, the brightly bicolored flowers are spectacular, and the long, sharp, anterior awn—along with the other awns on the involucre—can make the collecting of this species a painful experience.”

Hardham (1989) suspected C. rectispina “of having been involved in episodes of hybridization with C. clevelandii to give C. uniaristata, with C. palmeri to give C. ventricosa, and with C. biloba to give local hybrid populations.” She notes that she found C. rectispina growing with C. biloba [at Black Mountain, La Panza Range, San Luis Obispo County] and C. obovata. It is also known to grow with C. staticoides and C. diffusa (CNDDB 2018).

In his 2005 Chorizanthe treatment in the Flora of North America, Reveal alludes to “recent molecular data” that “indicate that Chorizanthe is embedded within Eriogonum . . . meaning that either all species in [subtribe] Chorizanthineae should be moved to Eriogonum, or Eriogonum should be fragmented into several genera.” Further, if it were to be determined that the approximately nine South American perennial species of Chorizanthe represent a separate genus from the North American annuals, then the “annual members (if not submerged into Eriogonum) would be called Acanthogonum Torrey.” More recent molecular evidence (Kempton 2012) has shown that subtribe Chorizanthineae is paraphyletic, along with Eriogonum, Chorizanthe, “and most subgenera.”

The CNDDB (2018) reports 38 occurrences of straight-awned spineflower with 10 located in Santa Barbara County, 22 in San Luis Obispo County, and the remaining six in Monterey County. Two of the Monterey County occurrences are on private land and are threatened with bulldozing and development. One of them was last surveyed for in 2005, with only 25 plants present, while the other has not been censused since 1985. Two other roadside occurrences are based on old collections and have not been relocated. These occurrences are likely threatened with road-maintenance and herbicide use. One occurrence based on a 2005 collection is on Camp Roberts and requires fieldwork as no other information is available. The final occurrence noted in CNDDB, based on a 1990 collection, is on BLM land and also requires fieldwork to document current conditions. As populations are small throughout the range of this species, they are likely threatened with invasive, non-native species and are subject to random, stochastic events.

1. Edward Palmer (1831–1911) was a consummate naturalist, making collections of plants, mammals, and Indian artifacts in South America, the western United States, and Mexico (Tiehm 1996). His name is commemorated in the names of many plants, including Chorizanthe palmeri.

2. “The McGuiness Ranch was probably at the head of Rocky Canyon southeast of Atascadero along an old road between Creston and San Luis Obispo that was used to haul wheat” (Reveal and Hardham 1989).

3. James L. Reveal (1941–2015), one of the botanical titans of the 20th and 21st centuries, specialized in Eriogonum and its relatives and also published prodigiously on botanical history, nomenclature, western North American floristics, plant conservation, and Angiosperm classification.

5. Reveal and Hardham (1989) left C. clevelandii and C. uniaristata in subsection Uniaristatae, with 3 stamens and “tepals all erose.”

Goodman, G. J. 1934. A revision of the North American species of the genus Chorizanthe. Annals of the Missouri Botanic Garden 21:1–102.