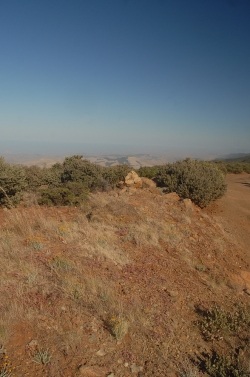 Brewer’s spineflower was described by Sereno Watson (1) in 1877, from an April 1861 William H. Brewer (2) specimen (No. 456) collected on “dry, rocky hillsides” in San Luis Obispo. Watson erroneously placed it “near C. pungens because the teeth were ‘united at base by an inconspicuous margin’” (Goodman 1934). Willis L. Jepson (3), in his 1909 Flora of California, stated that the species was “[i]nsufficiently known and perhaps only a variety” of Chorizanthe staticoides.

In 1934, George J. Goodman (4) placed the taxon in his new subsection Staticoideae (5) of section Herbaceae Benth. (6), “with a center of distribution in Los Angeles County.” This subsection also included C. fimbriata, C. leptotheca, C. staticoides, C. wheeleri, and C. xanti—all with six involucral teeth and perianth lobes generally entire, but of two different sizes. Of the Herbaceae members without scarious involucral margins, Goodman considered the Staticoideae as “the most primitive.”

Based on morphology, Goodman believed that Brewer’s spineflower seemed to “constitute a northern offshoot of C. staticoides,” as did Jepson. He observed that the “broadly foliaceous, sometimes nearly orbicular bracts” were very distinctive,” along with the “involucres in small clusters ... , the short appearance of the involucres, caused by the shortness of the teeth, and the short flowers with broad lobes.”

In their 1989 “Revision of the Annual Species of Chorizanthe,” James L. Reveal (7) and Clare B. Hardham (8) retained section Staticoideae and all of its subordinate taxaexcept for C. fimbriata, which they placed in subsection Flavae. In their circumscription, the subsection consisted “of a group of closely related species that are rarely sympatric and distinguished one from another on ecological and morphological differences”—and probably with the “same aneuploid chromosome number of n=19.” The authors suspected that “C. breweri evolved from typical C. staticoides, differentiating out on serpentine outcrops.” They remarked that the “two species are readily distinguishable even when they occur on nearly adjacent sites, as they do east of San Luis Obispo.”

In his 2005 Chorizanthe treatment for the Flora of North America, Reveal alluded to “recent molecular data” that “indicate that Chorizantheis embedded within Eriogonum. . . meaning that either all species in [subtribe] Chorizanthineae should be moved to Eriogonum, or Eriogonum should be fragmented into several genera.” Further, if it were to be determined that the approximately nine South American perennial species of Chorizanthe represent a separate genus from the North American annuals, then the “annual members (if not submerged into Eriogonum) would be called Acanthogonum Torrey.” More recent molecular evidence (Kempton 2012) has shown that subtribe Chorizanthineae is paraphyletic, along with Eriogonum, Chorizanthe, “and most subgenera.”

Seven occurrences fall on USFS Los Padres National Forest lands. Most of these occurrences have not been updated recently and require fieldwork. Some contain other rare taxa including Arctostaphylos obispoensis, Calochortus clavatus var. clavatus, Calochortus obsipoensis, Carex obispoensis, and Dudleya abramsii subsp. murina.The only documented threat in these areas are impacts from off-road vehicles. One occurrence on BLM land consists of thousands of plants and is threatened by trampling by cows and recreational users.

The one occurrence that straddles the Monterey County line includes the length of San Carpoforo Canyon, with ownership unknown (but including Los Padres National Forest in Monterey County and perhaps the Hearst Corporation). This occurrence is based on a 1912 collection by Ira J. Condit (9) and has not been relocated.

1. Sereno Watson (1826–1892), expedition botanist of the Clarence King Expedition and later curator of the Gray Herbarium at Harvard University (Wikipedia 2018).

4. George J. Goodman (1904–1999), distinguished plant taxonomist, Professor Emeritus and Curator Emeritus of the Bebb Herbarium at the University of Oklahoma for 33 years (Lawson 2000).

5. “[F]rom the Greek statikos, causing to stand, and eidos, like or similar to, alluding to the similarity of this species to statice [Limonium spp.] in the Plumbaginaceae” (Reveal and Hardham 1989).

6. Section Herbaceae, “from the Latin herbaceus, of herbs,” vs. perennials, encompasses the bulk of annual Chorizanthe species in North America and is essentially restricted to those members of the genus that occur in California and Baja California (Reveal and Hardham 1989).

7. James L. Reveal (1941–2015), one of the botanical titans of the 20th and 21st centuries, specialized in Eriogonum and its relatives and published prodigiously on botanical history, nomenclature, western North American floristics, plant conservation, and Angiosperm classification.

Goodman, G. J. 1934. A revision of the North American species of the genus Chorizanthe. Annals of the Missouri Botanic Garden21:1–102.

Watson, S. 1877. Chorizanthe breweri. Proceedings of the American Academy of the Arts12:270.