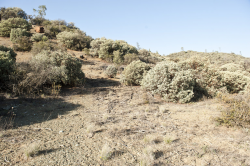 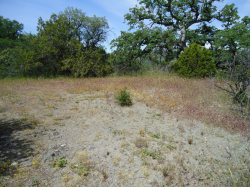 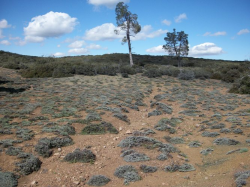 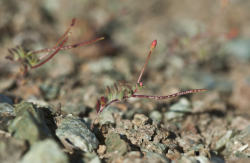 Originally believed to be restricted to stable serpentine alluvial stream and river terraces, Camissonia benitensis has subsequently been found in upland areas along the ecotone between non-serpentine rocks and tectonic serpentine masses, serpentine landslides, and ancient serpentine alluvial deposits. These areas have been collectively termed the “serpentine geologic transition zone,” and they harbor most of the known occurrences (BLM 2014, CNDDB 2017).

Camissonia benitensis can be confused with two widespread but closely related species: C. contorta and C. strigulosa (see photos). Hexaploid (2n = 42) Though C. contorta grows sympatrically with C. benitensis in serpentine-derived soils, the two species can be distinguished by examining the hypanthium hairs: C. contorta has only 1 type (rod-shaped and transparent), while C. benitensis has 2 types (linear and white and rod-shaped and transparent). Tetraploid (2n = 28) C. strigulosa, which does not occur in serpentine, can also be distinguished from C. benitensis by its hairs, which are generally strigose rather than spreading, and its often smaller flowers (petals 2.1–4.5 mm long) (Wagner 2012).

April to June (plants do not appear every year)

Peter H. Raven first discovered Camissonia benitensis in 1960 along Clear Creek in San Benito County and published a description of the new species in his 1969 monograph of the genus. He believed its range was limited to serpentine alluvial stream terraces in the vicinity of the type collection and hypothesized that the narrow-endemic tetraploid C. benitensis was probably derived from the widespread tetraploid C. strigulosa.

Dick et al. (2013) investigated “the distribution of genetic diversity” in C. benitensis across “two distinct serpentine habitats across several watersheds.” The researchers “compared genetic diversity with that of its two widespread relatives, C. contorta and C. strigulosa, and examined the potential for hybridization with the latter species.” They found that genetic differentiation “between habitat types” was insignificant, and that “three cryptic genetic clusters” exist that do not “correlate with habitat or watershed.” The results show that the species exhibits “higher inbreeding levels and ... lower genetic diversity in comparison to its close relatives.” In addition, they “found no evidence of hybridization between C. benitensis and C. strigulosa.” In order to “maximize conservation of the limited amount of genetic diversity,” the researchers “recommend mixing seed representing the three cryptic genetic clusters across the species’ geographic range when establishing new populations.”

Camissonia benitensis exhibits a cyclical “boom-bust” population cycle occurring approximately every 2–3 years; from < 1000 plants documented in seven separate years from 1983 to 2009 to > 100,000 in 1988 (USFWS 2009). Seedbank studies have shown that the number of seeds in the soil is “much larger than the observed numbers of above ground plants,” and seeds are known to remain viable for at least 20 years and possibly for 120 years (Taylor et al. 1989, USFWS 2009, BLM 2011, 2017). The BLM has concluded that monitoring of the soil seedbank provides a more accurate indicator of population size and stability (2017).

As C. benitensis has been found to be a poor competitor and intolerant of shading, the BLM has determined that a “light to moderate level of human disturbance” can be beneficial, as well as livestock grazing and wildfire, which remove competing vegetation, especially annual grasses (2014). A 2009 (BLM) study found that “organic matter ... greatly increased ... survival and productivity of CABE,” and that “organic amendment of serpentine ... in disturbed habitat is essential in increasing the survival and productivity of this species.”

Logging and quicksilver mining in the nearby New Idria mining district began during the mid 1850s; historic impacts to C. benitensis populations were primarily related to these activities. This 75,000-acre serpentine mass comprises most of the Clear Creek Management Area (CCMA), the majority of which is public land managed by the Bureau of Land Management (BLM). In 1984, the BLM designated 31,000 acres within the CCMA as an Area of Critical Environmental Concern (ACEC).

Level serpentine alluvial stream terraces in the Clear Creek/San Carlos Creek watersheds—long thought to be the only habitat of C. benitensis—were especially heavily impacted, and these impacts only intensified over time. Off-highway vehicle (OHV) recreation became popular in the area during the 1950s, and by 1970 it was recognized as the primary threat to C. benitensis (USFWS 2006).

In 1979, only 70 Camissonia benitensis plants were observed in flower (USFWS 1985). In 1983, ca. nine suboccurrences (colonies) harboring ca. 1,000 plants in total were observed, with the largest occurring on private land and threatened by active gravel mining (USFWS 1985). Primarily due to the threat arising from OHV use, Camissonia benitensis was listed as Federally Threatened in 1985 (USFWS). No critical habitat was designated at the time as it was deemed unwise due to the threat of vandalism (USFWS 1985).

A seven-year-long ecological study of the species was funded by the BLM (Taylor 1990, 1991, 1993, 1995), along with the attempted establishment of several experimental populations. Though new populations were discovered during this period, Taylor (1993) stated that C. benitensis remained “biologically endangered, a status ... not reflected by its formal listing status.”

Various measures to protect the species and enhance its habitat were undertaken by the BLM during the 1990s and early 2000s, aided by the Monterey Bay Chapter of the California Native Plant Society (CNPS). These included barrier construction, hiring of a permanent botanist, establishment of survey and monitoring protocols, and the installation of educational signage (USFWS 2006).

Despite these efforts, the apparent outlook for the species continued to decline. As a result, in 2004 a lawsuit was filed by CNPS and the Center for Biological Diversity against the BLM, claiming that the management plan did not provide sufficient protections as required by the ESA. The lawsuit resulted in OHV restrictions to protect C. benitensis and other sensitive species (BLM 2006). The ACEC was temporarily closed in 2008 due to the Environmental Protection Agency (EPA) finding risks to the public from asbestos, and as of 2014, permits are required to enter certain portions of the area. Former OHV staging facilities within the ACEC have been closed, and serpentine terrace areas within the Clear Creek watershed have been restored as habitat (BLM 2009).

A Recovery Plan for C. benitensis completed in 2006 (USFWS) required actions including the protection of known occurrences and potential habitat, the addressing of soil erosion, the development of a management plan, seedbanking, and public education. At that time the species was documented by 53 colonies within 27 occurrences, most of which had < 100 plants in any given year (USFWS). The species was categorized as “facing a high degree of threat” with “a low potential for recovery” (USFWS 2006). The 2009 Five-Year Review (USFWS) did not alter this status (USFWS), though the number of documented colonies had increased to 64 (BLM 2014). Five of these colonies were artificially established in the 1990s by Taylor (1993).

In 2010 and 2011, several additional habitat types were discovered to support C. benitensis in upland areas in or near serpentine substrates. One habitat type has been termed as the “serpentine geologic transition zone,” and others include serpentine rock outcrops and shale outcrops/barrens (BLM 2014). Intensive surveys of these areas resulted in the documentation of 295 more colonies, “for a total of 361 ... known by 2011,” including a population in Priest Valley, just over the Monterey County line. Detection of new colonies has continued since 2011, and as of 2016, 651 colonies have been documented (BLM), comprising 60 CNDDB element occurrences (generally, populations separated by > .25 mile of suitable habitat). It is not known if the newly discovered colonies have been documented by voucher specimens.

In 2014, BLM produced a Compliance Monitoring & Adaptive Management Plan as part of its 2014 CCMA Resource Management Plan, outlining “specific actions” and refining the monitoring protocol in order to track “threats to the species and its habitat to assess the status of the species over time.” Following approximately seven years of ecological research/monitoring by the BLM, by 2017 the Central Coast Field Office has concluded that it has fulfilled all four recovery actions/delisting criteria for the species and “believes that C. benitensis has been recovered based on the results of population surveys, ecological research, and removal of the assumed OHV threat” (O'Dell, personal communication). Based on a greater understanding of the range/distribution of the species and its disturbance-dependent ecology, the BLM asserts that the original data used for classification of the species as threatened was in error.

In April 2017, U.S. Representative Jimmy Panetta introduced H.R. 1913, the Clear Creek National Recreation Area and Conservation Act (GPO 2017). In general, the Act would “promote environmentally responsible off highway vehicle recreation” in the proposed “Clear Creek National Recreation Area.” Should the Act become law, the 2006 CCMA Resource Management Plan Amendment and Route Designation Record of Decision” would serve as the interim management plan and “incorporate natural resource protection information not available in 2006.” “No later than 2 years" following the date of enactment, a “comprehensive management plan would be produced.” The Act passed in the House in July of 2017 and heads to the Senate next for consideration. For more information, see: https://www.govtrack.us/congress/bills/115/hr1913/text/rfs#link=3_c_~T1&nearest=H74889C3947164C8F96DD6DEEE44737BA

O'Dell, R. 2011. Bureau of Land Management: Annual report for the 2010–2011 season: monitoring and status of Camissonia benitensis and implementation of the 2006 Record of Decision. Hollister Field Office, Hollister, CA.