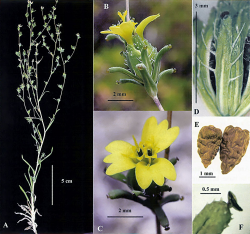 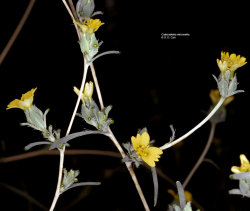 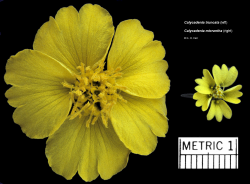 Along with Calycadenia hooveri, C. spicata, C. truncata, and C. villosa, C. micrantha has generally 1 terminal, tack-like gland on each peduncle bract and the central ray lobe generally much shorter than the lateral lobes and widest at its base. Though very closely related to the most widespread species in the genus, C. truncata, morphologically similar C. micrantha differs from that taxon in its generally shorter stature (C. truncata ranges from 2–12 dm tall) and relatively slender stems (C. truncata can be robust), as well as its few-flowered heads (C. truncata has 3–25 disk flowers) and shorter rays (those of C. truncata measure 4–12 mm long) (Carr and Carr 2012). The two taxa have been observed growing sympatrically, though their growing seasons only partially overlap (Painter 1998).

During the 1980s and 1990s, Robert L. Carr and Gerald D. Carr were made aware of several unique populations of plants “related to Calycadenia truncata” in Lake and southern Colusa counties. These plants were “shorter and more slender than most and had very tiny heads with only 1 or 2 obscure, tiny ray flowers and 1 or 2 disk flowers” (Carr and Carr 2004). In 2004, they described these plants as Calycadenia micrantha.

As the “heads and rays suggested the possibility of self-compatibility,” the Carrs conducted greenhouse studies with individuals from a number of populations. They concluded that “all individuals were self-compatible, a condition known to exist in only one other species of Calycadenia, C. hooveri G. D. Carr.” They also found that “although dozens of reciprocal crosses of these populations with self-incompatible forms of Calycadenia truncata [were] made, cypselae with embryos were generated only when the self-compatible form served as the female parent.” Carr (1975) observed the same pattern in C. hooveri, “and suggested that it may be the result of unilateral interspecific incompatibility, as discussed in Lewis and Crowe (1958).”

Their greenhouse studies led the Carrs to reexamine Calycadenia truncata DC. subsp. microcephala H. M. Hall, a taxon described by David D. Keck in 1946. Keck separated his subspecies from its closest relative “subsp. scabrella (Crew) Keck ... by the reduced number of disk florets ... and the smaller heads.” The Carrs examined specimens cited by Keck, along with others he had annotated, and found that though some did correspond with their new taxon, C. micrantha, others represented “populations of self-incompatible C. truncata plants with somewhat larger heads and rays.” Carr and Carr (2004) note that depauperate specimens, “especially those poorly pressed or without flowering heads at anthesis, could easily be confused” with C. micrantha.

Monterey County contains only three of the 22 known occurrences, and these are located in two adjacent quads in the central Santa Lucia Range. Two of the three are located in the interface between U.S. Army–owned Fort Hunter Liggett and the Los Padres National Forest along and in the vicinity of the South Coast Ridge Road. The third occurrence lies to the east in Fort Hunter Liggett proper. All occurrences are in serpentine chaparral and serpentine barrens and in areas where C. truncata has also been collected, though their phenologies differ. As the area is quite rugged, more surveys are required to determine whether more populations exist.

Carr and Carr (2004) observe that “populations are generally small with few individuals,” and emphasize that the “species is surviving in an extremely limited and very fragile habitat.” Threats include road maintenance/off-road vehicles/dust/soil compaction; alteration of fire regimes and, potentially, controlled burns and fuel break construction; changes in hydrology; competition from non-native species; trampling from grazing animals and, potentially, feral pigs; and military activities (CNDDB 2017). In addition, small populations are vulnerable to random, stochastic events and climate change.

Baldwin, B. G. 1993. Phylogenetics of Calycadenia (Compositae) based on ITS sequences of nuclear ribosomal DNA: chromosomal and morphological evolution reexamined. American Journal of Botany 80(2):222–238.

Carr, G. D. 1977. A cytological conspectus of the genus Calycadenia (Asteraceae): an example of contrasting modes of evolution. American Journal of Botany 64:694–703.

Keck, D. D. 1946. A new subspecies of Calycadenia truncata from the Coast Ranges of California. Leaflets of Western Botany 4:259–260.