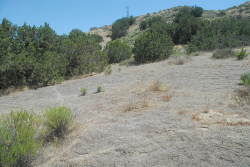 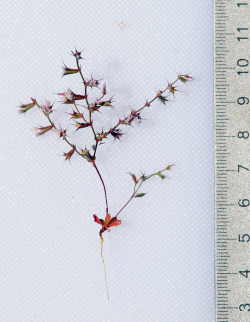 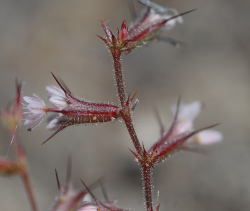 Aristocapsa (arista = awn; capsa = box or case, alluding to the awned involucres) is a member of the primarily North American subfamily Eriogonoideae Arnott, which includes buckwheats and spineflowers and occurs mainly in the western U.S. The subfamily differs from other members of Polygonaceae in its lack of well-defined ocreae (scarious stipular sheaths). The specific epithet insignis (meaning “remarkable”) refers to the unusual features of this taxon.

A monotypic genus, Aristocapsa differs from other members of its subfamily “by the combination of five-awned involucres that are slightly corrugated, three-parted inflorescence bracts that are awn-tipped, and (4–)6 flowers per involucre. The base chromosome number [n=14] is unique in tribe Eriogoneae. Pterostegia (tribe Pterostegieae) is the only other genus of the subfamily with that number. Among [members of the subtribe] Chorizanthiineae, only Centrostegia and Aristocapsa have curved embryos, the condition usually found in [subtribe] Eriogonineae” (Reveal 2005).

Restricted to the inner South Coast Ranges of Central California.

Indian Valley spineflower, the only member of its genus, has been difficult to place taxonomically and “migrated” through several genera before eventually arriving at Aristocapsa. It was first described as Chorizanthe insignis by Mary K. Curran [= Katherine Curran, K. Brandegee] from an 1885 collection she made in Indian Valley, Monterey Co. “near the Salinas River” in the Diablo Range. In 1910 it was described as Centrostegia insignis (Curran) A. Heller, and in 1934 was reclassified as Oxytheca insignis (Curran) Goodman. Goodman later rejected his initial placement (1957), returning the taxon to Centrostegia due to the elongated involucral tube and trilobed bracts. In 1978, James D. Reveal stated that Centrostegia insignis should probably go into a distinct genus, and that genus was most closely related to Oxytheca. In 1989, the monotypic genus Aristocapsa Rev. & Hardham was described, with the authors stating that Aristocapsa was “not obviously related to any other extant genus” and was “easily separable from Oxytheca (n=20) as defined by Ertter (1980).” Based on the 3-lobed alternate bract, they placed Aristocapsa “near Mucronea and Centrostegia.”

Eriogonoideae s. s. is a morphologically diverse, species-rich New World lineage that is hypothesized to have recently diversified—mainly in arid areas in the western U.S. (Kempton). James D. Reveal (1978) suggests that the Eriogonoideae is quite old, and arose during near or at the beginning of the Tertiary, probably during the Oligocene or Miocene epochs (7–38 mya), during a period when the climate was drying, and herbaceous angiosperms were developing rapidly and increasing in numbers. He posits that the subfamily may have originated from a subtropical group of New World polygonaceous plants during this period and divided into northern and southern complexes, with the original source becoming lost. Over time, the northern forms became reduced in stature, supporting a reduced inflorescence and involucre. Species proliferated with the annual habit most likely developing during the Quaternary in an area resembling the current Great Basin.

A 2012 molecular study (Kempton) found that while Eriogonum and Chorizanthe are paraphyletic—confirming the conclusions of several other studies—along with most subgenera in the subfamily, the tribes Eriogoneae (of which Aristocapsa is a member) and Pterostegieae are monophyletic. In the study, the “Oxytheca” clade (containing Oxytheca, Mucronea, Systenotheca, Acanthoscyphus, Aristocapsa, Centrostegia, Dodecahema, and Eriogonum spp. that are similar in morphology to Oxytheca, Mucronea, and Systenotheca) was “strongly supported in all analyses.” This clade “may warrant taxonomic recognition,” and if it were recognized on the generic level, would use the earliest published name—Mucronea Benth.

The CNPS Inventory of Rare and Endangered Plants (2017) cites development as a threat. Clearly, the Indian Valley spineflower is quite rare with few, small populations, so is especially vulnerable to extinction from stochastic events.

Though the current treatment in the Jepson eFlora (Reveal & Rosatti 2017) considers Indian Valley spineflower to be extirpated in Monterey Co., in 2001, Reveal stated the opposite. The Indian Valley type locality (near the boundary of Monterey and San Luis Obispo cos) constitutes one occurrence (Abrams 1944, CNDDB 2017), and though plants have not been observed there since the late 1800s, suitable habitat remains. Field surveys are required to determine the status of this species in this location, though much of the land in this area is privately held.

The second Monterey Co. occurrence lies near Jolon, on Fort Hunter-Liggett, where the spineflower was last observed in 1993 (CNDDB 2017). Here too, suitable habitat remains, therefore CNDDB does not consider the species to be extirpated in Monterey Co.

In an 1893 article (citing 1892 collections by William Vortriede from the “Santa Lucia Mountains” and 1893 collections by Alice Eastwood from “Jolon”), Townshend S. Brandegee stated that Chorizanthe insignis Curran [= Aristocapsa i.] was “frequent in the range”—however, it is curious that so few collections were made if this were actually the case. The exact locality of Vortriede’s “Santa Lucia Mountains” collection (CAS681242) is unknown and may or may not represent an additional location.

Two San Luis Obispo Co. occurrences are considered to be extant. One, located along Highway 58 in the La Panza Range, is well-known to botanists (J. Chesnut, pers. comm. 2017). In 2011, hundreds of plants were observed (see photographs; CNDDB 2017). It is likely that Robert F. Hoover (1970) was referring to this population when he stated that “in a favorable year the small plants are abundant enough to color the ground pink.” Though the occurrence is predominantly on private land, plants are known to occur outside the fence on a CalTrans right of way.

The Black Mountain area occurrence, also in the La Panza Range, is based on two collections by Clare Hardham from 1956 and 1957, but as far as is known, has not been relocated. Though this occurrence falls within the Los Padres National Forest, Indian Valley spineflower is not included on the Forest Service’s list of sensitive species, perhaps due to the age of the collections. Field surveys are needed.

The final San Luis Obispo County occurrence, based on a 1956 collection by Hardham (“hills north of Nacimiento River at Triguero Crossing”), is likely extirpated as this area is now covered by the Nacimiento Reservoir. Field surveys are needed.

1. A single 1885 specimen (M. K. Curran s.n./DS89804) from “San Benito County” is not mentioned in any of the literature and is most likely in error. The sheet carries the notation in pencil “Isotype,” indicating that it most likely came from the type locality in Indian Valley, Monterey Co.

Goodman, G. J. 1934. A revision of the North American species of the genus Chorizanthe. Annals of the Missouri Botanic Garden 21:1–102.

Heller, A. A. 1910. Catalogue of North American plants north of Mexico, exclusive of the lower cryptogams, Vol. 3:97. Published by the author, Los Gatos, CA.