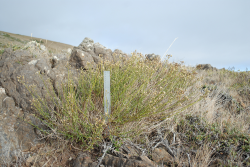 This fact sheet was prepared by Dylan Neubauer & Dean W. Taylor under award NA04N0S4200074 from the National Oceanic and Atmospheric Administration (NOAA), U.S. Department of Commerce (DOC). The statements, findings, conclusions, and recommendations are those of the authors and do not necessarily reflect the views of the NOAA or the DOC.

In Monterey Co., San Simeon baccharis occurs in a creek gorge in crevices in very hard, gray, bleached rock (see photo), or on cliff faces of reddish serpentinite on n- and ne-facing slopes, in shade or part sun, with Eriogonum fasciculatum and Quercus durata. In San Luis Obispo Co., San Simeon baccharis occurs in a variety of habitats including the ecotone between coastal scrub and coastal prairie and occasionally in coastal scrub with Salvia mellifera, Baccharis pilularis subsp. consanguinea, and Diplacus aurantiacus; in riparian woodland or willow thickets and in shrub-dominated floodplains; on dry, shady, rocky slopes; and on steep slopes in dwarf chaparral with Ceanothus maritimus (Keil & McLeod 1987, CNDDB 2017). 50–480 m.

Baccharis plummerae was described in 1880 by Asa Gray from a specimen collected “in the mountains near Sta. Barbara.” It was named for Sarah Plummer (= Sarah Lemmon), its discoverer, “an ardent botanist, whose name it is a pleasure to commemorate.” In his 1970 Vascular Plants of San Luis Obispo County, Robert F. Hoover described San Simeon baccharis from collections of male and female plants (7756 & 7757) he obtained at the “forks of San Simeon Creek.” He remarked on the shrub’s distinctiveness, adding, however, that it did “not seem to different enough to rank as a species.”

Though specific threats to this taxon are unknown, in general, small populations are vulnerable to random, stochastic events (USDA 2005) and climate change. Dioecious species, like this one, are even more vulnerable as the loss of one sex prohibits successful reproduction. This issue is essential to any future monitoring efforts (Wilken, pers. comm. 2017).

Limited to six known occurrences: one in Monterey Co. and five in San Luis Obispo Co. The single Monterey Co. occurrence (see photograph) is on the Hunter-Liggett Military Base and, as of 1996, comprised ca. 20 individuals. Due to difficulties involved in surveying the steep terrain, it is likely that population numbers are higher. The area’s remoteness precludes most threats (CNDDB 2017). Ca. 500–1000 acres of suitable habitat exists on the nearby Los Padres National Forest, and there is a “moderately high probability” that the species also occurs there (USDA 2005). Surveys are needed.

The five San Luis Obispo Co. occurrences are on the private Hearst Ranch, and four fall within the “Arroyo de la Cruz Endemic Area” (Keil & McLeod 1989), which is considered to be a biodiversity hotspot within the County (Haydu 2012). There San Simeon baccharis shares habitat with several other local endemics—all of which are of conservation concern (Keil & McLeod 1989). Occurrences in this area range from Arroyo de los Chinos south to Arroyo del Oso. Except for the westernmost occurrence along Highway 1, the three more inland occurrences have not been observed since the 1980s, when at least two of them were known to support many individuals (CNDDB 2017). The southernmost occurrence, near San Simeon Creek, is based on the type locality and has not been observed since 1949 (CNDDB 2017).

In 2005, a conservation easement was put into place for Hearst Ranch, which protects the land in perpetuity. Still a working cattle ranch, Hearst Ranch has been subject to grazing for more than a century.