Illustration from Abrams and Ferris (1951) 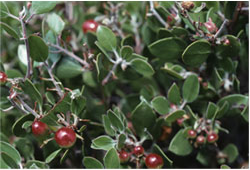 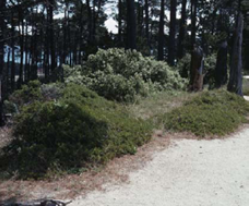 The Presidio of Monterey, under Monterey pine. The low mounded shrubs are A. hookeri ssp. hookeri. 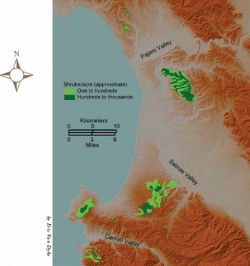 This fact sheet was prepared by Dylan M. Neubauer and Dean W. Taylor under award NA04N0S4200074 from the National Oceanic and Atmospheric Administration (NOAA), U.S. Department of Commerce (DOC). The statements, findings, conclusions, and recommendations are those of the authors and do not necessarily reflect the views of the NOAA or the DOC.

Mounded to erect shrub to 1.5 m tall, without a basal burl; leaf blades, flat, bright green, shiny, glabrous in age, similar on both surfaces, 2-3 cm long, 1-1.5 cm wide, lanceolate to widely elliptic; nascent inflorescence spheric, cup-like, bracts spreading; berries glabrous, 4-8 mm wide. Hooker’s manzanita grows near the similar sandmat manzanita (A. pumila); the two can be differentiated by the sandmat manzanita's having different tones of green on either side of its cupped leaves. Sandmat manzanita also differs by usually having glandular berries. Hooker’s manzanita is also similar in appearance to sensitive manzanita (A. sensitiva), which has flower parts in 4s (rather than 5s) and berries 3-4 mm wide and occurs in the Santa Cruz Mountains well to the north of Hooker’s manzanita (Parker et al. 2013).

February to May (identification possible throughout the year).

Endemic to the Monterey Bay region of central California. The southernmost range consists of a solitary plant at Malpaso Creek, on property owned by the State Coastal Conservancy (Nedeff, pers. comm.).

The largest stands of Hooker's manzanita occur on the Fort Ord National Monument, which contain thousands of acre of potential habitat. Twenty years of weed-abatement on the Monument have greatly improved the habitat quality for this and other rare species. Stands in the Prunedale region have declined owing to development and fire suppression (Griffin 1978, Van Dyke and Holl 2001). Two stands in Monterey County near Prunedale visited by Roof (1980) in 1964 and 1966 were subsequently extirpated by residential subdivision. The last remaining Santa Cruz County stand, a disjunct, northern range extension of the species, occurs within a small area including the Highway 1 right-of-way.

This species requires fire to regenerate from a soil seedbank. The exact triggers for germination are unknown, but may (as with other manzanitas) include a combination of both heat and chemicals from charred wood or smoke. The necessary fire-return interval for the species is also unknown but is probably between 80-100 years. Fragmentation of the habitat by housing may make restoration of fire-regime difficult.